On This Day…
9th June 1936
Elizabeth Garrett Anderson Born
Born in Whitechapel. She was the first female doctor to be trained in Britain and went on to promote the medical training of women at a time when medicine was an all-male profession. Elder sister of Millicent Garrett Fawcett. Mother of Dr Louisa Garrett Anderson.
Determined to become a doctor despite the restrictions on women, she enrolled at Middlesex Hospital as a nursing student and spotting a loophole, took, and passed, the apothecary examinations. The London Society of Apothecaries promptly banned women from taking their exams. To achieve her medical degree she learnt French and sat the exams in Paris. The British Medical Register refused to recognise this qualification. Even the most subservient of women would be raving feminists by this stage. She founded a hospital staffed entirely by women and a medical school so that women could train as doctors.
1908 she was elected Mayor of Aldeburgh, the first female Mayor in England.
On her death the hospital she founded was renamed after her in her honour.
Cockney Cabbies
One Big City, Three London Cabbies and the Rest Is History
#london #history #tours #guides #cabbies #taxis #londontaxis #blackcabs #architecture #historical 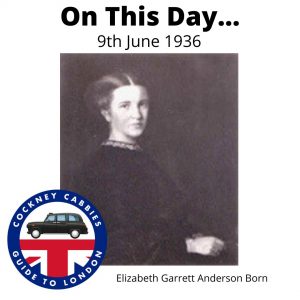