On This Day…
9th August 1902
Coronation of King Edward VII
King Edward VII. Originally scheduled for 26 June but delayed due to the main player needing to have his appendix out, an innovative operation at the time. The elderly Archbishop Temple officiated and managed to place the crown back-to-front on the King’s head.
Like his mother before him, and his grandson after him, he chose a regnal name different from his first baptismal name. Alexandrina Victoria chose ‘Victoria’. Her son, Albert Edward, chose ‘Edward’ VII, to leave ‘Albert’ permanently associated with his father. Edward VII’s grandson,Albert Frederick Arthur George, Duke of York, chose ‘George’ VI. He was a second son so they’d probably felt ‘Albert’ was a safe name, but, we guess, George VI rejected it for the same reason that Edward VII did.
Cockney Cabbies
One Big City, Three London Cabbies and the Rest Is History
#london #history #tours #guides #cabbies #taxis #londontaxis #blackcabs #architecture #historical 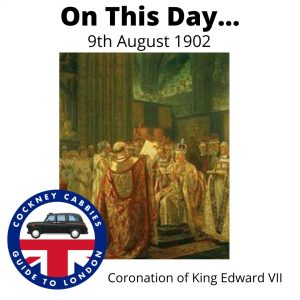