On This Day…
4th April 1995
Kenny Everett Died
Comedy broadcaster. Born Maurice James Christopher Cole in Liverpool. Inspired by the Goons. Got a job on the pirate Radio London by sending in an audition tape. Worked for Radio Luxemburg, the BBC when Radio 1 started, and Capital Radio where he presented the breakfast show. He also had a number of successful television shows, all, as he would say, “in the best possible taste”. Despite this he had a habit of upsetting authority by insulting them on air and got fired a number of times.
Married Lee Middleton (ex-girlfriend of Billy Fury) in 1969 but this was dissolved in 1984. He then lived with a former Soviet Red Army soldier, Nikolay Grishanovich, who died of AIDS in 1991. Kenny died of AIDS at home, 91 Lexham Gardens, Kensington. Much missed.
Our photo shows Kenny as Gizzard Puke, one of his many characters. (The alternative was Miss Cupid Stunt.)
Cockney Cabbies
One Big City, Three London Cabbies and the Rest Is History
#london #history #tours #guides #cabbies #taxis #londontaxis #blackcabs #architecture #historical 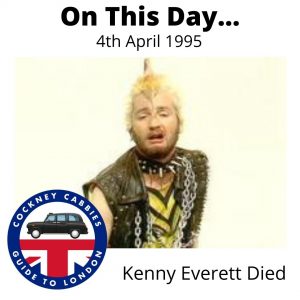