On This Day…
3erd March 1943
Bethnal Green WW2 Disaster
The worst civilian disaster of WW2. 173 men, women and children lost their lives as they went down into Bethnal Green underground air raid shelter in response to a siren. They died not from a bomb but from the crush as someone slipped and people behind continued pushing in. The Book of Remembrance has the list of names. Our picture source, the excellent Ian Visits, has a full report of the incident and the ensuing enquiry.
We’d always assumed that anyone who was passing could use a tube station as a shelter and perhaps that was true but also, it seems, individuals had passes. We saw one at the Dignity Funeral Museum in Rosebery Avenue. It reads: “London Civil Defence Region, Borough of Tottenham. Admit person named below for shelter at Turnpike Lane Station”. This one was for a 12-year old girl and lasted just one month, in 1941.
2019: The Mirror has an interesting interview with a doctor who worked at the hospital where the the victims were taken,and some photos from the time.
Cockney Cabbies
One Big City, Three London Cabbies and the Rest Is History
#london #history #tours #guides #cabbies #taxis #londontaxis #blackcabs #architecture #historical 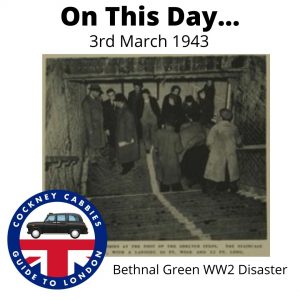