On This Day…
1st May 1851
Great Exhibition Started
From the V&A website:
“The Great Exhibition of the Works of Industry of all Nations was held in the Crystal Palace in Hyde Park, London. It was the first international exhibition of manufactured products and was enormously influential on the development of many aspects of society including art and design education, international trade and relations, and even tourism. The Exhibition also set the precedent for the many international exhibitions which followed during the next hundred years.”
Six million people came to visit the exhibition in the Crystal Palace designed by Joseph Paxton.
The Great Exhibition memorial behind the Albert Hall gives the following:
“Opened by Her Majesty Queen Victoria, May 1st 1851.
Closed October 15th 1851
Number of visitors: 6,039,195
Total Receipts: £522,179
Total Expenditure: £335,742
Number of exhibitors: 13,937
viz. British – 7381, Foreign – 6556
Size of building: 1848 feet by 456 feet
Architect – Sir Joseph Paxton
Contractors – Fox and Henderson”
The Great Exhibition was not only the first such event but it was also the only one to make a profit.
The Exhibition drew large numbers of sightseers to the area. This prompted the equestrian performer, William Batty, to erect an open-air amphitheatre, known as the Grand National Hippodrome, or Batty’s Hippodrome, on an undeveloped site nearby, now occupied by De Vere Gardens, shown on this map. This closed when the Exhibition closed.
If you wish to see a remnant of the Great Exhibition go to Floris in Jermyn Street, which is lined with lovely wood and glass cabinets salvaged from the Exhibition. There is also a little Floris perfume museum at the back, and the staff won’t mind you looking without buying. And, on a different scale, you can see the Coalbrookdale Gates at the entrance to South Carriage Drive from West Carriage Drive. Created for the Great Exhibition they were moved here when the Albert Memorial was constructed.
Cockney Cabbies
One Big City, Three London Cabbies and the Rest Is History
#london #history #tours #guides #cabbies #taxis #londontaxis #blackcabs #architecture #historical 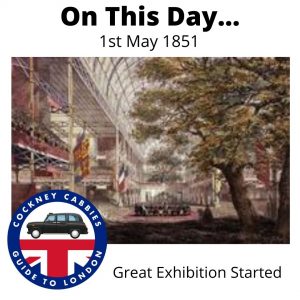