On Ths Day…
18th March 1848
Princess Louise Duchess of Argyll Born
Born at Buckingham Palace, sixth child of Queen Victoria. Was a talented sculptress taught, and possibly more, by Joseph Boehm. In 1871 caused a stir by marrying John Douglas Sutherland Campbell, Marquis of Lorne and heir to the dukedom of Argyll, but not actually royalty. He was appointed Governor General of Canada in 1878 and she moved with him to Ottawa as his vice-regal consort. She was the most artistic of Victoria’s children, being an able actress, pianist and dancer and a prolific sculptress. She died at Kensington Palace.
She was present in 1890 when Boehm died at his home. Alfred Gilbert, a sculptor and presumably a mutual friend, comforted her in her distress. Significantly Gilbert subsequently gained many royal commissions and also most of Boehm’s papers were destroyed. This all comes from the trustworthy Oxford Dictionary of National Biography.
For more information on this sculptor we suggest the book ‘Working Against the Grain: Women Sculptors in Britain c.1885-1950’ by Pauline Rose.
Cockney Cabbies
One Big City, Three London Cabbies and the Rest Is History
#london #history #tours #guides #cabbies #taxis #londontaxis #blackcabs #architecture #historical 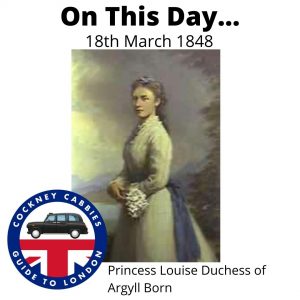