On This Day…
14th March 1933
Michael Caine Born
Actor. Born Maurice Joseph Micklewhite in St Olave’s Hospital, Rotherhithe. His career started in repertory theatre and television, eventually getting his big break in the film ‘Zulu’. He went on to star in many more films including ‘The Ipcress File’, ‘Alfie’ and ‘The Italian Job’. Famous for the catch phrase ‘Not a lot of people know that’, which he never actually said. (It was supposedly coined by Peter Sellars in an impersonation of him). Knighted in 2000.
Before he was 10 the family were moved from war-torn Bermondsey to Walworth, first in Urlwin Street and then Marshall Gardens. The later home was a post-war pre-fab at Elephant and Castle but has been demolished and even the street no longer exists. He went to John Ruskin School then Hackney Downs Grocer’s School and then after a year, Wilson’s Grammar School.
Information from I live in SE16. Urlwin Street still exists but we can find no sign of Marshall Gardens in the area on an 1895 map. However there is a Marshall Street which used to run parallel to, and midway between, Gaywood Street and Garden Row.
We understand that the area of prefabs was replaced with a housing estate, which has also now been demolished, and we have read that prior to that demolition there was a plaque commemorating Caine but we can find no hard evidence.
Cockney Cabbies
One Big City, Three London Cabbies and the Rest Is History
#london #history #tours #guides #cabbies #taxis #londontaxis #blackcabs #architecture #historical 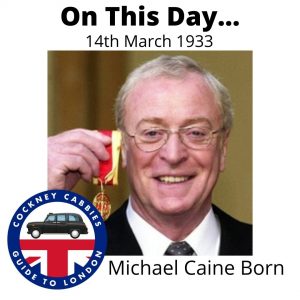