Founded as The Hospital for Sick Children, the first hospital in England to provide in-patient beds specifically for children. Its first premises were at 49 Great Ormond Street a converted 17th century townhouse on the east corner with Powis Place. The principle founder was Dr Charles West.

In 1858 it raised enough money to be able to expand next door, into 48 Great Ormond Street.

1869 the Hospital opened a convalescent home at Cromwell House, the 17th century mansion on (then still rural) Highgate Hill, which was retained until 1924.

A new purpose-built hospital was constructed 1871-5 designed by Edward Barry, on the land which had been the gardens of the two houses and it became known as “The Hospital in the Garden”. The foundation stone was laid on 11 July 1872 by Princess Alexandra accompanied by the Prince of Wales. The hospital occupied the whole of the eastern side of Powis Place and contained the Gothic chapel, endowed by the architect’s brother William Henry Barry in memory of his wife Caroline. 1878 a new Isolation Block, was opened to the north.

1893 the two original houses on Great Ormond Street were demolished and replaced by a building with 3 large wards, designed by Charles Barry Jnr, Edward’s brother. This is the surviving redbrick structure with “The Hospital for Sick Children“ in a first floor frieze and “Paul O’Gorman Building” on the porch frieze.

The 1875 building was demolished in 1990 and replaced with the Variety Club Building. The chapel was preserved and moved (a short distance) on its concrete foundation by hydraulic skates to its present location. 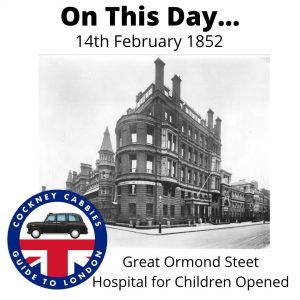