On This Day…
11th May 1762
Spencer Perceval Assassinated
Prime Minister – and the only one, so far, to have been assassinated. Born Audley Square (now a car park). Appointed by George III as PM in 1809. Shot in the lobby of the House of Commons, at about 5.15pm, by John Bellingham who had a financial grievance with the government. Bellingham peacefully gave himself up and expected his reason for the murder to be accepted. He insisted that he was sane and acted alone. (We have found conspiracy websites claiming it was all a Jewish plot by the Rothschilds in connection with the American War of Independence, and something to do with Cuba – couldn’t quite follow but we’re sure they are on to something.) Bellingham was tried within days and hanged at Newgate Prison on 18 May.
Being a royal palace, anyone who died within the Houses of Parliament was entitled to a state funeral so the dying Perceval was dragged outside to avoid such an event, or so goes the story as told by the reputable guides to the Houses of Parliament. Many had blamed Perceval for Britain’s deep recession so the news of his murder was extremely well-received by the population and Bellingham considered a bit of a star. Meanwhile he continued to plead his sanity and explain his case, at length, even to the Newgate chaplain on the scaffold.
There is no memorial to Perceval in the House of Commons but there is Perceval Avenue, Hampstead, the site of Belsize House, his home 1798 – 1807. The house was demolished in 1937 and the whole area built over.
Cockney Cabbies
One Big City, Three London Cabbies and the Rest Is History
#london #history #tours #guides #cabbies #taxis #londontaxis #blackcabs #architecture #historical 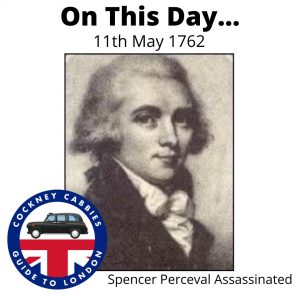